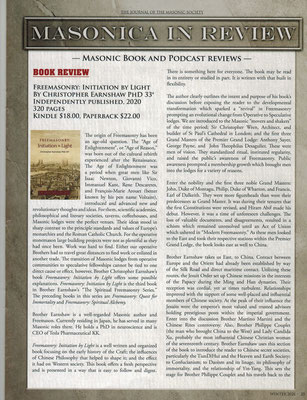 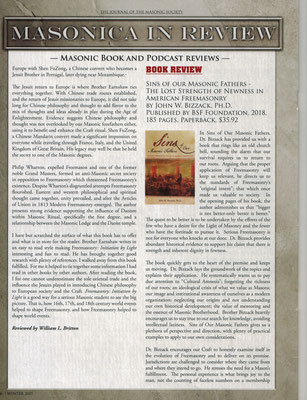 What Earnshaw brings to the attention of the reader is something that one would likely never have considered previously, and that is not just a tale regarding ‘secret societies’ but the secrets within the society, not just regarding the initiations but the construction of the ‘degrees’ that form the first ‘levels’ (if you will) of the society.

Freemasonry: Initiation by Light is certainly not a ‘light read’, it is meticulously detailed and seeks to not only help new members on their journey within the Freemason structure  but also assist those with an interest in the period seeking to see a fuller picture of the Enlightenment, which saw many changes in religious thinking and philosophy towards the modern views we have today.  In Freemasonry: Initiation by Light Christopher Earnshaw highlights the rich tapestry of Freemasonry origins, explaining the characters and events with incredible depth and detail vital
to any historian and member.

This is the first in a three-book series written and privately published by Christopher Earnshaw, himself an experienced 33rd degree Freemason, and a mason for over 30 years. The book derives from lectures given while he was Master of the Research Lodge of Japan from 2007 and 2010. His extensive knowledge of things East and West is exhibited in this volume. Volume 1 provides a detailed history of the eighteenth century formation of the Grand Lodge of England, concentrating on the first three Grand Masters, with a detailed social historical outline at this time, before changing tact and focusing on connections between the Far East and Masonic ritual. Indeed, the main thesis of the book is about connecting the first degree in freemasonry with Daoist ‘Transmission of Light’.
Basically the book is made up of six chapters;

Prior to getting into Chapter 1 lies a 25 page ‘prologue’ which begins with a proclamation titled “The Sanction” whereby a PGM of the Grand Lodge of Japan gives his sanction for the book. I was concerned as part of the sanction has “we have perused the said Book, and finding it to correspond with the Antient practices of this Society, so recommends the same”. It must refer to Chapter 5 and 6 where a description about masonic matters occur. Good to see that the Grand Lodge of Japan (or at least a PGM) gives it the thumbs up.


In a nutshell the thesis argued in the book is that the first degrees of Freemasonry were influenced by Daoist teaching. The author himself was recently initiated into Daoist teachings in 2016 where he noticed the initiation “as virtually the same as the First Degree Ritual”. The main argument for any connection that I could see thus lie in similarities between the Masonic First degree and that of Daoist Initiation. Such similarities are later used in an attempt to validate historical connections between certain characters of the 18th century. The author argues that each degree was created based on a unique type of alchemy. Indeed, he notes that to understand the craft ‘properly’ one needs a classical education including Latin and Greek, and understanding of alchemy, familiarity with the ritual of Freemasonry and an understanding of Chinese philosophy and Dao.


By and large the book is easy to read and to follow and one that I enjoyed. The chapters outlining the beginning of the Grand Lodge and the Social History of England are very detailed leaving few stones unturned. The first three Grand Masters and later on the Noble GM’s are discussed in detail. Some historical points are contestable such as when he argues that the Freemasons thought of themselves as a counterbalance to the Royal society (page 111), but the main historical thread is accurate. There was much written that was not critical to the purpose of the book and the chapters did go off track many times with irrelevant stories such as Pocahontas, and another on the so called ‘Black Queen’ Sophia Charlotte. An external editor would have tightened up much of the text. You cannot write everything that happened in England at this time, although an attempt was made here. Yet, it should not be forgotten that many who will read this book would be ignorant of 17th and 18th century history.


Although being familiar with the history outlined in the first two chapters, I enjoyed reading them, and was totally enthralled with the other chapters, in particular the historical backgrounds to China including the Christianity in China. The outline of Dao history and similarities with Freemasonry were interesting, and pushed in this book, however, from an anthropological perspective quite a few secret societies, including those from non-state societies such as the Pacific, share much in common, although having no historical connections. These include signs of recognition, symbols whose meaning are based in metaphors, strict initiation rites, and sacred places where only the initiated are allowed, and even then after trials and questions asked. Yes, connections are many but no-one would argue for historical connections with Freemasonry.


Chapter 3 ends with the statement: “the scene is now set for a Chinese Jesuit to come onstage who, unwittingly, may have been the catalyst that changed Operative Freemasonry forever”. The man was the Mandarin Shen FuZong, who had been taught Latin by Jesuits and who knew Dao and alchemy. Chapter 4 is written to argue that through Shen FuZhong the Dao initiation and YiJing had fallen into the hands of the first three Grand Masters around 1718. The fundamental problem is that there is not a shred of evidence to back this up. Yes, Shen FuZong came to London and Oxford in 1687 and met a number of people, including Thomas Hyde an orientalist who worked in the Bodleian Library. Yet, it has not been demonstrated that Shen passed on the Dao initiation ceremony, called the ‘Transmission of Light’, to Thomas Hyde. Even if he had, as intimated in this book, why would Hyde have passed them onto fellow antiquaries such as Ashmole or Humfrey Wanley (both Freemasons) who also worked in the Bodleian Library. Hyde apparently introduced Shen to Robert Boyle (the father of modern chemistry) in 1687. But to then argue that Shen influenced Newton who was a friend of Boyle is a long bow to draw. Furthermore, to argue for a connection then to Payne (the second Grand Master) because Newton worked with him in the Exchequer, and then with Desaguliers, who was Newton’s secretary, is another long bow to draw. Shen did meet many people, but that does not equate with passing on knowledge of Dao secrets which was integrated into Masonic ritual.


Chapters 5 and 6 explore and sets out the Dao initiation with Masonic practice and Lodge set up. It is beautifully written outlining a beautiful Dao degree. Dao ritual is an area I am ignorant of and I was educated in reading it. I thoroughly enjoyed reading about the landmarks of the Masonic Lodge and comparisons with Dao landmarks. Again I found this chapter a fruitful one.


In summary, connections with Dao ritual and Freemasonry is interesting for many reasons. For me it demonstrated the uniqueness of humans to create similar societies from culturally distinctive groups. I am not convinced about any historical connections between the two, but the journey reading this book was definitely worth it. Only someone with the skills and experiences of Christopher Earnshaw could have written this book and indeed bring light to an area I was ignorant of. Is this not what research is all about? Well done.


Glenn R. Summerhayes
Bro Glenn Summerhayes is the convenor of the next ANZMRC Conference in Dunedin, NZ. He is also Professor of Archaeology in the School of Social Sciences at the University of Otago.

Review of Freemasonry: Spiritual Alchemy
A review written in Dec 2019 by FMT the journal of the United Grand Lodge of England
Review of FSA in FMT - UGLE.pdf
Adobe Acrobat Document 371.1 KB
Download